In Trails of Cold Steel III, the ARCUS is upgraded into the ARCUS II with newer designs and functions.

Like the previous battle orbments in the series, its basic architecture allows installing Quartz to strengthen the user’s physical capabilities, enabling Orbal Arts, and communication between places. However in the CS trilogy, the quartz to be slotted in are more refined from the previous games, while adapting the Master Quartz central slot, a function later adapted into the ENIGMA II in Ao no Kiseki. 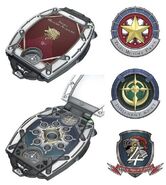 Different frames for each organization

The perspectives of the ARCUS concept, open and close

Add a photo to this gallery

Retrieved from "https://legendofheroes.fandom.com/wiki/ARCUS_(Orbment)?oldid=27838"
Community content is available under CC-BY-SA unless otherwise noted.