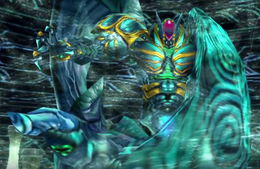 The Azure Demiurge also known as the Hollow Phantasm is the final boss of The Legend of Heroes: Ao no Kiseki.

With KeA as its core as she was the homunculi reincarnation of the original Demiurge, the being manifested within The Farthest of the Azure Tree. Eventually, the being vanished after the Special Support Section defeated it and KeA is saved, becoming a normal girl.

The Azure Demiurge can cause someone to Vanish which causes a party member to disappear from reality. It also has the ability to summon allies to fight.

Retrieved from "https://legendofheroes.fandom.com/wiki/Azure_Demiurge?oldid=24695"
Community content is available under CC-BY-SA unless otherwise noted.