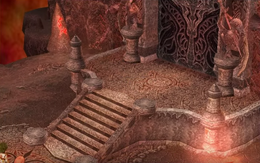 Gehenna (煉獄, Rengoku) is an underworld dimension, and the equivalent of "Hell" (per biblical translation) in the Trails series.

According to the scriptures of the Septian Church, Gehenna is the underworld realme associated with the punishment of wicked souls, land of the dead and/or the imprisonment of dark/evil gods or demons.

Trails in the Sky the 3rd

An illusory depiction of Gehenna is visited where Kevin Graham and Ries Argent fell in Chapter 7 during the events.

After clearing the above chapter, the location becomes accessible through the Arca of Recluse.

Retrieved from "https://legendofheroes.fandom.com/wiki/Gehenna?oldid=22150"
Community content is available under CC-BY-SA unless otherwise noted.