Start a Wiki
'Lookout Cottage' (見晴らし小屋, Mibarashi Koya) is small settlement in The Legend of Heroes IV: A Tear of Vermillion. It is the residence of Sage Lemuras. Behind the cottage, there is a Shrine to Nephtys. The cottage is where Avin is taken by Gawaine after he is separated from his sister, Eimelle.

Avin and Gawaine arrive at the Lookout Cottage after the invasion of the Cathedral. Avin has a nightmare about what had happened three days after his arrival. After several attempts, Lemuras is able to wake up Avin from his nightmare. During their meal, Lemuras makes a request to Avin, asking him if he could deliver a note to the elder of Ourt Village. Avin is able to deliver the note and return, but is annoyed by Mile.

During the day of the Harvest Festival, Mile shows up at the Cottage to pick up Avin. Lemuras lied about what Avin had thought about him and was able to encourage Mile to put more effort into befriending Avin. After the Harvest Festival, Lemuras served as a professor to Avin and Mile and tutored them about various things throughout the rest of their childhood.

Chapter 1 - Man of the Kingdom

When Avin turns seventeen, he receives the Kabessa from Lemuras and is asked to deliver it to Sage Dinerken before heading out on a journey to find Eimelle. Lemuras says that the whereabouts of Eimelle is unknown even to him and that he must find her on his own. Immediately after, Lemuras passes away in his bed. Avin buries the sage north of the cottage. Before heading out, he brings a pet with him on his journey.

Avin, Rutice, Muse, and Martie arrive at the Lookout Cottage during sunset to look for clues on how to open the Nephtys Shrine. They split up to search individually. Muse and Martie search inside the cottage, while Rutice searches the area around Lemuras' grave. When Avin searches the scarecrow, he finds a letter from Lemuras that predicted what would happen in the future. Lemuras cast a spell on the scarecrow so that only Avin could find it. Enclosed inside is an amulet that will allow Avin to break the seal of the shrine entrance.

The cottage is built upon a hill above Ourt Village. It is a small house with a living room and two bedrooms. In one of the bedrooms, there are stacks of books which contain some history of El Phildin and an old notebook that describes the role of a sage. Outside is a shed for storing chopped wood, two carts for transporting goods, a scarecrow crafted by Lemuras, and a Lookout Tower where one can look out over the landscape. After the prologue, the grave of Lemuras can be found north of the cottage. 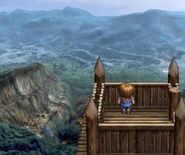 Up atop the Lookout Tower
Add a photo to this gallery
Retrieved from "https://legendofheroes.fandom.com/wiki/Lookout_Cottage?oldid=15240"
Community content is available under CC-BY-SA unless otherwise noted.