Start a Wiki
Mishie (みっしー) is a character that appears in Nayuta no Kiseki. It also appears in every instalment of the Trails series, usually through a merchandise or plushie items.

Mishie appears as a grey fur-coloured cat. It is marked by its cries of "mishishi". The innards of its ears are a soft red, just like a regular cat-based creature, and the ends of its tail in white. Mishie stands in the form of a human and never crawls on its paws.

Mishy is a rare creature, rarely seen by anyone. 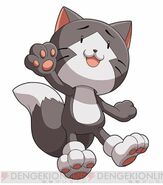 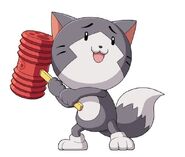 Add a photo to this gallery
Retrieved from "https://legendofheroes.fandom.com/wiki/Mishie?oldid=27492"
Community content is available under CC-BY-SA unless otherwise noted.