Patricks's relationships with others are likely unbalanced by his noble behavior, as he tends to look down on Class VII , especially with Rean.

Patrick's meeting with Rean started after the orientation assembly as he wondered with his posse about the freshmen in the red uniforms. Their meeting face to face during regular school hours puts them in a shaky position after Patricks offers Rean his invitation.

To the end of it, Patrick and Rean show more getting along with each other even at the start of the second year at Thor's Academy.

The two met as the accidentally bumped into each other after Elise gets lost upon meeting with her brother. This allowed Patrick to have a slight change after his defeat in proving better then Rean and his class. Since that meeting, Patrick develops a liking to Elise, leading Rean to get involve as an overprotective big brother. 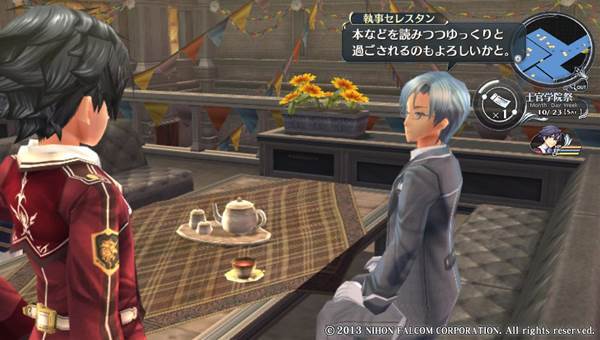 Celestin is a highly skilled butler of the Hyarms family who serves Patrick directly. Despite him being only a commoner, Patrick cares deeply for Celestin who is his sole friend and closest confidant. Through Celestin, the deeper qualities and layers of Patrick's character are revealed.

Retrieved from "https://legendofheroes.fandom.com/wiki/Patrick_T._Hyarms/Relationships?oldid=20359"
Community content is available under CC-BY-SA unless otherwise noted.