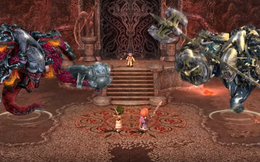 The Seventy-Seven Devils are mythological beings - demons - mentioned by the Septian Church and native to the realm of Gehenna. Little is known about these entities but a few have been described briefly by the church.

Among some of the Devils known include Arachne the Glutton, weaver of nightmares who consumes the souls of those lost in labyrinths; Astarte the Abyssal who is one of two gatekeepers of Gehenna; Bennu the Wailing Coffin who is seen as a ferryman that guides the souls of the underworld and Rostrum the Cruel, a commander of demons who also serves as the other gatekeeper to Gehenna.

Retrieved from "https://legendofheroes.fandom.com/wiki/Seventy-Seven_Devils?oldid=21088"
Community content is available under CC-BY-SA unless otherwise noted.