The Trails Collaborations (軌跡コラボ) are collaborative crossover events to promote the overall series through other media franchises. They spread the image of the game's existence and its publishing founder, Falcom towards those who never played the game yet or are oblivious to the series' existence. Depending on the agreement between official staffs, collaborations can involve something small like DLCs featuring characters and items from other games or introducing other characters into the game's content.

On May 16, 2015, User Joy Japan announced they formed a collaboration event between the fantasy 3DMMORPG Grace of Fairsky (碧空のグレイス, Aosora no Gureisu) with Falcom's popular RPG, The Legend of Heroes: Trails in the Sky in The Legend of Heroes: Yume no Kiseki from May 9 to June 13, 2013.[1]

Contents include characters like Estelle, Joshua, Kloe, Olivier and etc. along with new collaborative missions.

On June 10, 2015, The Sega Network Company of Sega Games has announced for the PSVITA version of Chain Chronicle V ~The New Continent of Bonds~, a limited time event will commence for Falcom's The Legend of Heroes: Sora no Kiseki - FC Evolution, the VITA remake of the original game from June 10 to June 29, 2015.[2]

Those who pre-register before the event dates will receive a "Tiny Inventor, Tita (小さな発明家 ティータ)" SR card.[3] 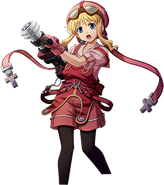 Add a photo to this gallery

On January 12, 2016, the game's server announced a similar limited event for the same Chain Chronicles V game between FC-EVO's following sequel The Legend of Heroes: Sora no Kiseki - SC Evolution[4] from January 12 to 21, 2016.

On September 17, 2013, Acquire, host server to the panel-action RPG, "Road to Dragons", has announced a collaboration event between Falcom's latest Trails installment, The Legend of Heroes: Trails of Cold Steel[5]. From September 17 to October 7, 2013, Road to Dragons allows access to the popular Cold Steel Characters such as Rean, Alisa, Laura, Jusis, Fie, and 2 secret more.

On July 18, 2014, Falcom's president, Toshihiro Kondo announced a collaboration event for Monster Hunter Fronter G, bewteen The Legend of Heroes: Trails of Cold Steel II relased for PS3 and PSVITA. Scheduled to be released on, July 24, 2014, the event consists of a DLC package where the MH avatar gets customizable clothing, weapons, etc. from featured characters as Rean Schwarzer and Alisa Reinford. [6]

Retrieved from "https://legendofheroes.fandom.com/wiki/Trails_Series/Collaborations?oldid=29244"
Community content is available under CC-BY-SA unless otherwise noted.